Do you want homeless sleeping on your doorstep?

What will you do to stop that from happening?  It seems the solution some have come up with is defensive architecture.  Is this the way of the future? We can’t help the homeless so lets make sure we don’t have to see them. Defensive architecture is about creating hostile spaces to prevent sleeping and sitting and in some cases peeing. No not pigeons people.

Alex Andreou summed it up well in his recent Guardian article

At the root of this cruelty, which treats the dispossessed like a pigeon infestation – fed crumbs by the kindly misguided, shooed away by the thoughtlessly indifferent and spiked by the inhumanly practical – are willful misconceptions about homelessness: that it is a lifestyle choice, which oddly becomes more popular during periods of nationwide economic ruin; that poverty is down to personal failure; that kindness perpetuates it; and, more than any misconception, that good shelter is readily available.

That article had over 400 comments and it looks like folk don’t like the idea.  The recent example in London which prompted the Alex article was met with outrage by the Mayor of London and  a 1000 signature petition to remove the doorway spikes. 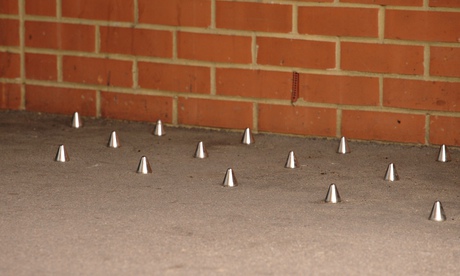 Artists have been responding to this situation for a while now.

Sarah Ross has designed suits which allow you to sit in these spaces.

Nils Norman has collected photos of the offending architecture as part of his playscapes project.. My response has involved a lot of retweeting and devoting my S11b plot to the park of the future featuring defensive architecture in the virtual world. I don’t want homeless sleeping on my doorstep either but am I willing to let them in?  Am I willing to even sit down and listen to their problems? As an artist I have a skill set and focused energy which can be put to use to give myself an opportunity to look at my response and hopefully offer that opportunity to you.

Edie, from the Forgive Me series of photographs.